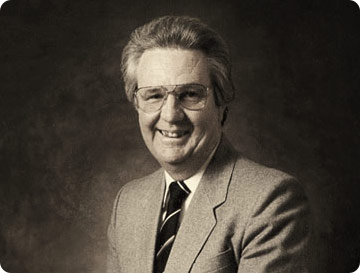 It is my privilege to share some thoughts about Dudley Cooper, one of our most loved and respected CRC fathers.

Dudley was one of my pastors when I came to Christ under Leo HarrisвЂ™ ministry in our movementвЂ™s mother church, the Adelaide CRC. It was 1971 and I was just a kid of 17, but it became very apparent to me in those early days, what a wonderful human being and a genuinely caring pastor Dudley Cooper was. I remember well, that when he heard of my involvement in what God was sovereignly doing in my local high school – how he encouraged me and in fact urged me on in my faith journey. This early validation helped me gain confidence that God had a ministry plan for my life.

When he left to go to New Zealand, I was so saddened but thankful that he had impacted my life while I was in my late teens. This was a common story for dozens of young people (including our current SA Chairman Pastor Hans Voortman) who were in the church at that time. Sacrifice, sincerity and servanthood was exampled by him and passed on to us so very naturally.

In talking to my wife Cathy last night, she reflected how she would see his gentleness, the undivided attention that he showed his children, and often wished that he was her father. It was out of his example, as a child looking on through a Christian community, that one of her strong impressions of fatherhood has come. It is his legacy in many ways that has shaped hers and many others reference points for a loving Heavenly Father. I am very grateful of his influence on her life and through her to our four beautiful children.

No one could doubt that Dudley was an вЂexceptionally good manвЂ™ whom one was instinctively drawn to. People respected him, not so much for his eloquence, although he was a terrific preacher, or his leadership style which was gentle and servant oriented, but because of his tremendous ability to make one feel like they experienced a little bit of Jesus when they were in his presence.

He brought calm and tranquil peace into the room with him without any effort. This is the testament of his relationship with Jesus.

It was he himself and his beautiful nature that helped our movement in Australia when he served as our National Chairman between 1985 and 1988. He was such a soothing and healing balm in the three years he led us. It was never about Him, but what he could do to advance the best interests of the movement he was called to serve Jesus through.

Those of us who served on the CRC National Executive Team under this genuinely humble example, will never forget him, and will always be deeply appreciative that he paved the way and encouraged a new generation of leaders.

The CRC in New Zealand was a recipient of his gracious manner. He became a great unifier and bridge builder in the years that he served Jesus in that country both in the CRC and between the Pentecostal jameshallison casino movements.

Upon his return to Australia, this thorough gentleman brought calm to some troubled waters here in Victoria and led as the State Chairman with great distinction.

Dudley did it all, he pioneered churches that are still going Sats pa spilleren, bankeren eller uavgjort for a vinne!Bli med pa noe som er mer komfortabelt – sett deg ned i stolen ved Mr Greens eksklusive gratis blackjack bord. strong today. Every local church he led (and there were quite a few) prospered under his Godly stewardship.

He authored several books and soon after his retirement, was commissioned by our National Executive to write the 50 year history of the CRC. вЂFlames of RevivalвЂ™ was released at our 1995 International Conference. It is required reading for every new CRC Pastor in online casino his or her credentialing journey.

He led our movement to great strength and unity with his pastoral heart and he continued in his retirement years to minister wherever there was a need, particularly in some of our churches that were faced with tremendous pressures and challenges. He healed them by his loving approach and selfless manner and wise advice.

Nationally he continued to input as part of the ChairmanвЂ™s Commission comprised of those past National Chairmen still in active ministry.

Even while his illness drained him and he couldnвЂ™t attend our six monthly gatherings, right to the end he was vitally connected and influential.

It was a particular joy to make a special trip for a day to see him and Bonny in their home as he realised his time on earth was coming to a close.

We spent a good part of the day reminiscing, laughing and rejoicing and even then he continued to encourage me, as he has always done through the years since I was a 17 year old babe in Christ, through to now because he really understood the relentless nature and unique pressures on the six men who have led our CRC movement.

I personally value so highly his wisdom so freely given.

Ken and Alison Chant wrote to share about Dudley and Bonnie. As lifelong friends together, who started out as young married couples, kids really in the Adelaide Assembly. It was through Bonnie that Ken became part of the CRC in the early 1950s when he received the Baptism in the Holy Spirit

All four pledged their lives to serving full time in CRC endeavours all over Australia, with influences internationally.

Ken writes: вЂњI deeply admired his gracious character, his absolute devotion to Christ, his loyalty to scripture and his unflagging service of Christ in the Church.

He laboured well, too, for the CRC, making a vast contribution to its growth and welfare; but even more, he was committed to the expansion of the Kingdom of God and to giving preeminence to Christ alone.вЂќ

In concluding, I speak not only for our National Executive Team, but for every pastor and leader within our CRC family, worldwide, who paused, prayed and quietly reflected when they heard that Dudley went to be with Jesus.

There is no doubt that he was received with the words вЂњwell done, good and faithful servant. Enter into your LordвЂ™s JoyвЂќ. This is the only commendation Dudley ever sought the eager smile of his Saviour, Lord and friend – Jesus Christ.

There is no doubt either, that each of us will always smile when we remember all the values Dudley has graced us with in his example, faithfulness & commitment to his Lord, family, friends and his beloved CRC movement.

Bonnie, and family members, you are part of DudleyвЂ™s legacy, and you share his honour today. Both of you are heroes of the CRC. We join with your sadness in being parted and pray GodвЂ™s strength, health and comfort during the days ahead.

Will you answer the call?

Make disciples of all nations

Our vision is to help expand the Kingdom of Jesus Christ on earth. Our mission is to exalt Jesus Christ and to extend His influence throughout the world.

From humble beginnings in 1945, the CRC has expanded to a presence throughout Australia, with a faith goal of having a church within every nation by 2045.